Pensus AB was founded in 2011 with the business plan to provide specialized consulting services and customized software, mainly in the field of scheduling and vehicle management.

Our target group is companies in the transport industry, primarily  in the public transport sector. 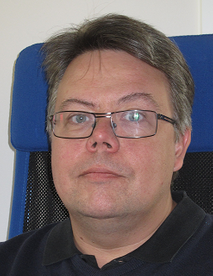 I have worked in the public transport industry in many different positions since mid- 90's and since early 1999 I have been focused on scheduling in various forms. Between the year of 2000 and 2013 I worked as manager for the scheduling tool HASTUS™ in two of Scandinavia's major bus operators and are specialized on installation, configuration, operation, training and support.

In addition to tenders and daily scheduling I have very good knowledge of HASTUS™ scheduling modules (Vehicle, Minbus, Crew, CrewOpt, Roster and Roster Optimize) on regular usage and analysis/creation of rules and attributes etc. Creating interfaces (OIG/OIR/RIR), translating HASTUS™, designing Crystal reports, project management on upgrades and responsible for system functionality in a large implementation of HASTUS™ is also entries on my resume.

When replacing an older staff planning system with HASTUS™ DailyCrew and SelfService in one of Sweden's larger transit companies I worked as a project manager and responsible for the relation with GIRO inc, developer of HASTUS™. This successful project was delivered as scheduled on budget, and as a part of it I also got good knowledge in the HASTUS™ modules DailyCrew, DailyVehicle, SelfService and PlanCrew.

I have since the early 90's worked with system development, initially by self-interest, but since 2000 on a professional level. A wide range of applications for various purposes have been designed, developed and deployed, ranging from simple programs in the form of HASTUS™-extensions that generates statistics and reports to a larger system for vehicle management with deployment optimization, and server software for remote exclamation of voice messages.